Established in 1981, Data Flow Systems has become an industry leading SCADA manufacturer and automation solutions provider for the water and wastewater industry. Recognized for our combination of project engineering, innovative design, integration services, and 24/7/365 customer support, DFS is able to supply complete solution packages. We have provided hundreds of SCADA Systems and thousands of RTUs throughout the United States.

DFS possesses a rich background of corporate experience in automated water/wastewater SCADA systems, as well as a combination of technical and management resources that possess specific knowledge of utility operating environments. The DFS headquarters is located in a modern, 31,000 square foot Corporate Campus in Melbourne, Florida. Nearly half of this facility is devoted to product manufacturing. DFS possesses, in-house, all necessary resource personnel and capabilities to successfully handle, in a timely manner, all aspects of the manufacture, installation and service of our SCADA products.

The strength of our SCADA products are reinforced by our commitment to them and their users. Our superior warranty, obsolescence-proof RTUs, and free SCADA software upgrades make DFS the clear choice. Because of our steadfast commitment to preventing product obsolescence, many systems installed decades ago still use much of the original remote hardware and have been able to take full advantage of all software and hardware upgrades. 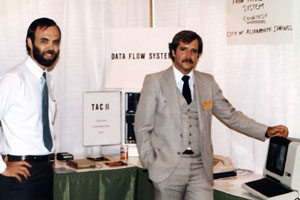 Data Flow Systems began as the brainchild of Tom Smaidris and his father, Frank. Frank, having retired from the U. S. Air Force, had taken on the task of maintaining the telephone line telemetry system that monitored lift stations in the City of Melbourne. He expressed to Tom that the system was fraught with headaches and lacked reliability. Tom opined that the problem was in the phone lines and that could be easily solved by switching to radio communications. Frank issued a challenge to his son: “If you think it’s so easy, do it!”

Tom, whose work at Harris Corporation in Palm Bay included radio telemetry for satellite uplink systems, accepted the challenge, recruited his coworker, Brent Saunders, as his partner, and started Data Flow Systems in 1981. It was at this inception of DFS, in a 300 square foot office over a beauty salon in downtown Melbourne, Florida that the hallmarks of the DFS product line were set:

In 1982, DFS landed its first customer, Acme Improvement District (now the Town of Wellington in Palm Beach County). Tom and his father installed those first RTUs, intended to control some distant well pumps, while Brent began directing the never-ending task of improving the system. Bryan Kattwinkel was brought on board to develop the server software; engineering staff was added to develop the hardware. In 1989, Steve Whitlock joined DFS as the first Sales Manager and the company’s future President, Dave Walker, was hired as a field technician.

The business plan actually called for DFS to design and manufacture the systems while the installation and service would be contracted to others. But their efforts to find a reliable installer that placed the same emphasis on quality control produced little more than frustration. They made a decision that would further distinguish this upstart company — DFS became the only SCADA company that designed, manufactured, installed and serviced their product.

During the later 1980s, the company moved into and grew out of a 3500 square foot area and, in the early 1990s, they took possession of a 12,000 square foot facility that allowed them to expand their services and capabilities to include custom control projects for water and wastewater plants. They had grown into one of the largest SCADA providers in the southeastern United States with over 100 water utility installations. DFS’ name began to find its way to new parts of the country as carefully chosen value-added resellers in the northeastern states, the Carolinas, Texas and California began to introduce their regional customers to the DFS product line.

DFS continued its growth through the turn of the century. In 2002, they acquired a modern, 31,000 square foot manufacturing facility in Melbourne’s industrial district. But this time, they made certain that there was room to expand without moving — the facility is located on 17 acres.

After more than a quarter century, DFS is considered the largest provider of radio and network-based SCADA systems for water utilities in the southeast United States. The TAC II SCADA System is now a touchstone in the industry and our systems engineering department has become one of the premier purveyors of custom plant and control systems. As of 2021, the ranks of our utility customers have swelled to over 400 systems with more than 25,000 RTUs installed throughout the country.

The stage is set for continued growth over the next 25 years. New leadership has been groomed to continue the founders’ legacy. We are proud of our products, our personnel, and our progress in the industry.  We remain grateful for the loyalty of our customers and the opportunity to serve the water industry.